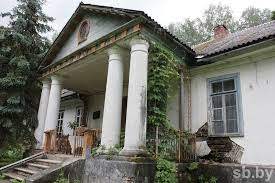 Raica was first mentioned in 1511 in documents of the Lithuanian Metrica. Its owners then were Bogush and Mishka Vereshchaka from the Kamen estate near Kobrin. Having been in the hands of Martin Gashtold, from the middle of the XVI century Riza was owned by Andrew Rezkogo and remained the property raetsky until the mid-NINETEENTH century. In 1838, Ludvika Raetskaya brought the estate as a dowry to Marshal Jozef Vereshchak of Novogrudok.

In addition to Ritzy in the possession of the family of Vereshchaky was the estate Kutusita and Pluginy, Fraxinella and Lubijana, and Tuganovichi. At the beginning of the NINETEENTH century, it was Tuganovichi that became a kind of center where the local gentry gathered. There, in Tuganovichi, the poet Adam Mickiewicz stayed with his friends Jozef and Michal, and there he met his Muse, Maria Vereshchak. In may 1832 Joseph Vereshchaka and Ivan Doganovskii signed a contract under which we exchanged estates Smallcity and Tuganovichi. Center of possessions Jozef Vereschaky moved to Plugin and then to Ritsu.

Jozef Vereshchaka's son františek inherited the estate in 1875. An Amateur botanist, he filled it with rare exotic plants.

In 1881, at the age of 42 years, Frank got married. His chosen one was the daughter of a Warsaw lawyer, Karolina Time. The financial condition of the young family gradually deteriorated, they had to sell off the land, as a result, the estate was reduced by more than half. On may 23, 1897, františek Vereshchaka passed away without knowing the happiness of fatherhood. The estate was inherited by his brother Casimir and his widow Karolina. In 1898, count Wawrzyniec von Puttkamer – the grandson of Maria Vereshchak-bought the estate from them. As a railway engineer, Graf participated in the construction of the Ural, Baku and Polesie Railways. The last of them took place a few kilometers from his family estate Bolteniki. In 1890. Wawrzyniec von Puttkamer retired and settled in Bolteniki. He actively participated in the public life of the region, and was twice elected to the state Duma of Russia.

In 1910, Raica was a wedding gift from the count to his daughter Janina and her husband, Adam Zsoltowski, a Professor at the University of Cracow. The young couple lived in Krakow, only occasionally visiting Raica. Before the Second world war, the Zholtovskys gave the estate to the Congregation of sisters of the Catholic apostolate (pallotin nuns). Local residents have fond memories of the nuns who had their own pharmacy garden and treated people.

After the war, the manor house was a hospital and polyclinic, then, until 2003 - an outpatient clinic with a pharmacy. After six years of neglect, in December 2009 it was bought by the Soldatov family of artists. Vera Soldatova is a member of the Belarusian Union of folk artists, a master of straw weaving, and was awarded the Efrosinya Polotskaya medal. Her works can be seen in museums in Russia, great Britain, the USA, and Belarus. The straw bison was given to Hugo Chavez during his visit to Belarus, and the hat was given to Hillary Clinton. One of the most striking works of the master is the iconostasis made of straw in the Church of St. John the Baptist in Dudutki. Together with Vera Evgenievna, her husband Alexander Soldatov, a master of icon painting, worked on the creation of the iconostasis. The couple, who settled in Raica, helps in the restoration of the Church of St. Barbara, which is located near the manor house.