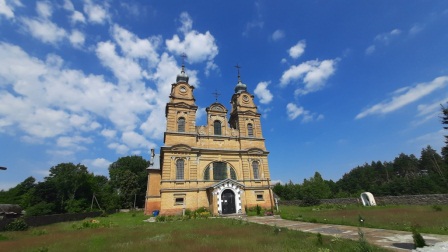 In 1904, on the site of an old wooden one, a new stone Catholic church of God’s Body was built in a neobarochny style. The temple was consecrated in 1905. After the Second World War it was closed; the building housed a stable. Returned to the Catholic Church in 1989, restored and re-consecrated in 1990. The Temple of the Body of God is a neo-Baroque-style architectural monument with some neo-Renaissance elements (arched windows in the towers, the main entrance with an arched opening in a rusticated frame). The temple building is a two-tower three-nave basilica.