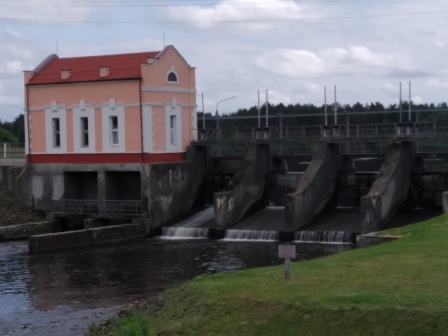 One of the power plants on the small rivers of the Grodno region, which today is experiencing a rebirth. In September 1953, in a solemn atmosphere, during a mass gathering of residents of neighboring villages near the village of Novoelnya on the Molchad River, the Novoelnyanskaya HPP with a capacity of 240 kW was put into operation.

For almost 20 years, the station gave current, and the surrounding villages shone in a myriad of lights until nightfall.

Then the era of globalization of the energy sector of the former USSR began. And small hydroelectric power plants were classified as unpromising. The country was captured by "gigantomania". In 1972, Novoelnyanskaya HPP was shut down as “unprofitable”.

In 1989, the buildings of the hydroelectric power station and the reservoir were transferred to the cooperative "Spectrum" and the collective enterprise "Pasum".

Due to the lack of technical supervision over the condition of the dam, hydraulic structures in spring 1993 during a flood, the dam was broken, and the reservoir practically ceased to exist.

Finally comes 1997, when a decision is made to transfer the dilapidated hydroelectric power station to the balance of Grodnoenergo. Two years later, work begins on the design and restoration of the HPP. On June 28, 2002, the hydroelectric power plant was “born” for the second time, it gave current to the power system of Grodno region. Its installed capacity is 220 kW. Two powerful 110 kW generators were installed. Two turbines have been restored.

A reservoir with an area of ​​50 hectares has been created. Estimated annual electricity generation is one million kilowatt-hours. In addition, a picturesque recreation area has been created. There are considerable fish stocks in the reservoir. In addition to pike, chub and other fish species, trout have also been spotted.